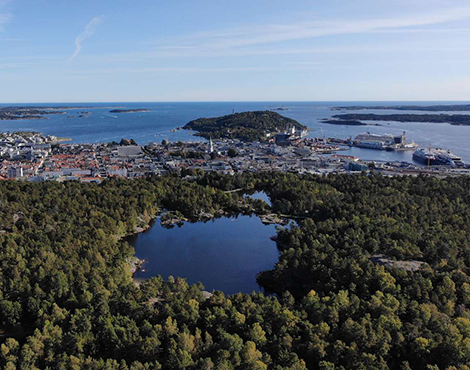 Kristiansand is known as the ‘capital of Southern Norway’ with beautiful nature close by, being the rough seaside and isles to the south and the wide forest surrounding the rest of the city. The Kristiansand-region is nicknamed “the coolest rivierain Norway” by the media, it is a modern city with a cosmopolitan history. A leading light in the technology sector and number one in exports, the Kristiansand-region is one of the fastest growing regions in Scandinavia.

Christian IV visited the location in 1630 and 1635. On the 5 of July in 1641, he formally founded the town of Christianssand on the "sand" on the opposite bank of Torridalselva (Otra). The town was laid out in renaissance style on a grid plan (the central section now known as Kvadraturen = The Quarters), and merchants throughout Agder were commanded to move to the new town. In return, they were to receive a variety of trading privileges and a ten-year tax exemption. (Source: Wikipedia)

Kristiansand is strategically located on the Skagerrak, and until the opening of the Kiel Canal between the North Sea and the Baltic was very important militarily and geopolitically. This meant that for centuries it served as a military stronghold, first as Harald Fairhair's royal residence, then as a Danish-Norwegian fortress, and later as a garrison town. Kristiansand is a gateway to and from the continent, with ferry service to Denmark and a terminus of the railway line along the southern edge of South Norway. Two major rivers, the Otra and the Tovdalselva, flow into the Skagerrak at Kristiansand. (Source: Wikipedia)

The coastal parts of the Skagerrak coast, which includes Kristiansand, is the sunniest part of Norway. Snow generally occurs in late December and in January and February. In the summer, most locals go to the Fiskebrygga, the archipelago opposite the city, and Hamresanden Beach, which is located about 10 minutes from the city centre near Kjevik airport. The temperature mid-June and onwards often passes 20°C. (Source: Wikipedia)

Historically, the shipping industry was the backbone of the local economy. The city has now developed and strengthened the environment within drilling technology and the supplier industry to the petroleum sector. (Source: snl.no)

Kristiansand is a popular summer tourist destination, attracting many visitors — in particular to its zoo. Kristiansand Zoo and Amusement Park, just east of the city, is the second most visited attraction in Norway, only surpassed by Holmenkollen in Oslo. (Source: Wikipedia)